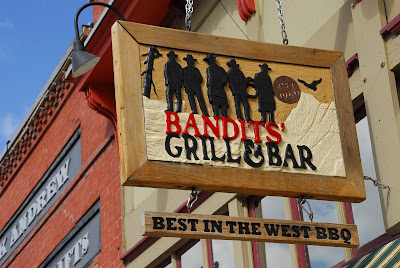 Bandits BBQ indeed is the best in the west as the sign concurs. Excellent nachos, outstanding brisket BBQ sandwich and good beer.Located about 45 minutes outside Salt Lake City in Park City Utah. Stay there if you need to go to the Salt Lake Area. Salt Lake City SUCKS

Revolutionary Picnic and Carnivale a Success

Tropic-Al's: Almost Surfside Dining
We started "cooking " Friday night the third of July for our big shindig an Saturday. I spent three and one half hours formulating my famous BBQ sauce, grilling eggplant slices, making salsa, grilling the sausage for the stuffed peppers and, finishing the menu.

Saturday at 6AM I began cutting the veggies, cleaning the grill and making sure the weather would hold up. Well the morons at the weather desk got it wrong again. While the sun shown brightly the wind whipped about all day scattering napkins and tortillas all over the island.

The 4 pound pork shoulder I had on the charcoal pit should have taken only three hours to cook. The wind prevented the inside of the grill from heating up enough and the internal temp of Porky the Pigs' shoulder was stuck at 130* for over an hour!


To remedy I added a layer of coals on the opposite side of my Smokenator 1000 and that fixed the problem. Two forks tore into perfect pork and pulled it apart into thousands of perfectory pieces that were then soaked down with "Partial Eclipse" BBQ sauce. The final product was devoured by the guests leaving me with only two fork fulls!!!! So much for "Kiss the Cook". Ended up taking almost fiver hours!

Also on the menu: Tortillas with spices and cheese, fajitas with all the fixins, eggplant with capressa, corn on the cob, spaghetti squash, sausage IN peppers, shrimp, shark, clams, scallops, garlic bread. NOT ONE HOT DOG OR HAMBURGER WAS GRILLED!!!!

This was gourmet 'Cue devoured by 20 guests. The guests left the island just after 9PM. We then sailed down wind and watched the fireworks from a high point and felt good seeing more than a dozen other islands scattered about celebrating Tropic-Al's "Revolutionary Picnic and Carnivale"

Tropic-Al's: Almost Surfside Dining
Taking a tip from GE, we heard that the federales' were coming our way looking for stashes of booty and rum. They won't find any though. We dredged the lagoon this morning, built a new waterfall just to wash out any sediment left behind.
All in preparation for the Carnivale and Revolutionary Picnic this weekend.

Tropic-Al's: Almost Surfside Dining
Had a test run on the gas unit last night. Everything went fine. Burnt hamburgers to a crisp as this is the only way the family eats them. Who am I other than just the cook.

Need to repair the leak in the lagoon. Other than that the coconut colony has not accepted any bailout money from Washington

Great Turn Out In Newburgh

I did not know what to expect Saturday Feb 22nd when I arrived in Newburgh at Adams Fairacre Farms to set up for my class on Rubs, Marinades and BBQ sauces. Of the three Adams locations crowd turn out during seminar season is hard to predict.

I average 50-60 in my audiences on gardening topics. BBQ is a big business at Adams but small in comparison to gardening revenues. However the first two seminars I did in February at Adams Newburgh set the record for attendance. In excess of fifty were in attendance for both seed starting and bird feeding!

Things did not start out well! Upon unloading my gear I discovered an entire bottle of SESAME OIL spilled onto everything in the tub! What a mess.

So I took advantage of my extra time, I always show up two hours before the scheduled start time just in case, and cleaned up the mess.

As usual five minutes before the scheduled 1PM start time only five people were seated. The clock hit 1 I started talking and the fashionably late filled every seat. Standing room only crowd again!

The I hit my stride.........systematically measuring out the spices and herbs for my signature rub "Red State Blue State". Then it was on to "Not So Crude Oil" vegetable glaze which splashed up on my blue shirt.

Finally I finished with Tropic-Al's Partial Eclipse BBQ Sauce. Ahh! I can still smell the aroma of the thick tomato based concoction that, has yet to, made me famous.

The questions went throughout the talk and the most memorable was when a gentleman asked me what the difference was between BBQ and grilling. I took about five minutes to answer his question extolling on family memories of pig roasts that lasted all night long in Jackson South Carolina. At the end of my explanation I asked him if that answered his question. He said yes. And I answered back that in the time it took me to answer his question several hot dogs and hamburgers would have come off the grill by now. I said that is grilling: BBQ is an experience.

Chicken Wing Shortage Predicted for Super Bowl Weekend? No Problem Make Great Snacks and Appetizers on the Grill Instead

Chicken Wing Shortage Predicted for Super Bowl Weekend? No Problem Make Great Snacks and Appetizers on the Grill Instead

In late February, my favorite seminar, BBQ comes up. Join me in Newburgh as I race through a one hour messy cooking demonstration making rubs, oils and BBQ sauce. It is a fast moving class that can only evoke thoughts of family cookouts in the deep south at my grandparents where we stayed up all night watching a pig slow cooking over a pit of burning embers. No one got any sleep but the results the next day were to die for. Well the pig already had done that for us so all we had to do was enjoy the tasty results.

For more information on our outrageous cooking and gardening classes visit http://www.adamsfarms.com look for the events/seminar link then click on your favorite Adams location for a complete list of upcoming seminars and lectures including Tropic-Al's!

It's Not Grilled But Then Again The Outdoor Kitchen is Froze Up!

Happy New Year BBQ nuts! Right now it is 12* outside and the deck is frozen which means no BBQing today. But I have to make something for the church soup and sandwich social next Sunday.

Just right for football playoff time and a winter lunch are chowders. I don't think it matters what kind of chowder. Just the sound chowder conjurs up thoughts of warm soup sipped slowly enjoyed with friends over crusty bread and good talk.

Since we do not like to go to great lengths on Sunday, other than to and from church then the couch for football, this chowder will be an easy one.

So here we go with : Tropic-Al's Corn Chowder with Chiles and Spicy Sausage

For four servings: 1/4 pound spicy sausage with patty form or links. Break the links up and remove the casing. Ground is better since it must look like ground hamburger to work well.

3 cups of good chicken broth. I find most broths are to laden with salt so choose a low sodium one if you desire.

Now for the easy part: place the sausage in a skillet and cook to break up the chunks and stir around until there is no pink left at all in the meat. Five minutes should be plenty for four servings.

Then the hard part is adding the corn and broth! Simmer this undeniably difficult recipe for 5-10 minutes to warm through. Serve warm.

Now here is where I would be tempted to add some garlic, fresh parsley, thyme and oregano to the simmer. Go ahead there is no coals waiting to ash over so load up the pot with good stuff nice sliced tomatoes.

On the side serve up crusty bread or nacho chips or tortillas.

Check Out These Racks!

We do not rent or sell your personally identifying information to other companies or individuals. Period.

Click Here To Learn How To Grow What you BBQ